Granulometry
Shingle from capital dredge then silt/mud from maintenance dredge

Between 1990 and 2006, several beneficial use projects were undertaken at Horsey Island on the eastern coast of England.  These involved placing dredged sediment directly onto intertidal habitats to achieve both habitat restoration and coastal protection objectives.  They include the first, and also some of the largest, such projects yet undertaken in the UK.

Horsey Island lies at the centre of the Hamford Water coastal inlet and provides an important coastal protection function for this embayment.  It is also important as a feeding, nesting and roosting habitat for birds.  However, it is also susceptible to wave attack on its northern side.  As a result, by the early 1990s its northern seawalls had been undermined and large areas of coastal habitat were lost (Dixon, 1992).

In response, several beneficial use initiatives were undertaken using sediment from capital and maintenance dredging at the nearby ports of Harwich and Felixstowe.  Some novel techniques were employed and the process was quite complex with multiple implementation phases and associated monitoring, consultation, consenting and assessment tasks.

Around 255,000 m³ of coarse and fine sediments were used in five main phases.  These placed sediments have since been relatively stable.  After placement, the coarse shingle and sand initially rolled landwards but was then stabilised when the silt was placed behind it.  The majority of the imported silt was evidently also retained on site.  There has been ecological improvement from this work.  Prior to the works, the site had largely been an eroded hard foreshore but was converted into a mix of habitats including mudflat, marsh and a shingle spit (latter used by nesting birds such as Little Terns).

This work has demonstrated the value of beneficially using dredge sediment for both coastal protection and habitat restoration.  It has also shown that while some environmental changes must occur in the short-term during such initiatives, long term benefits can be achieved which can persist over at least two or three decades (ABPmer, 2016).  The work at Horsey has therefore been a valuable precedent for beneficial use work at other sites in the UK. 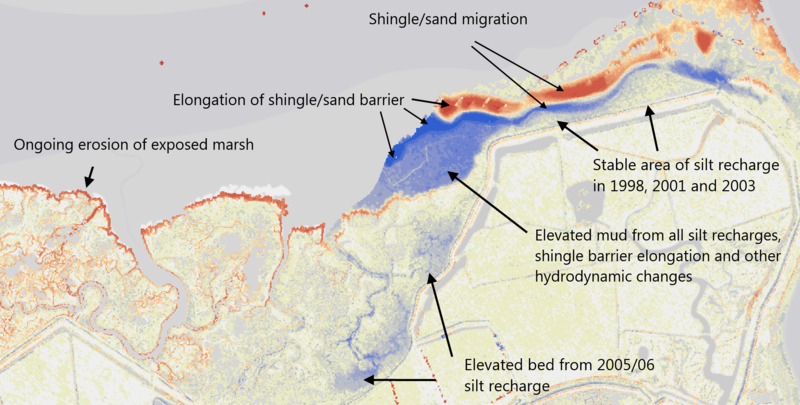