Lake Markermeer is an artificial shallow fresh water lake in the Netherlands, which was formerly part of the Zuiderzee (tidal bay). After the area was closed off with dams it became a fresh water lake with unique ecological values (Natura2000 area). Over the past decades, several ecological problems have arisen related to, amongst others, high turbid water, decrease in biodiversity and change in nutrients. One of the solutions is to increase the habitat diversity, which is rather limited due to the size and shallow character of the lake and the hard infrastructural elements at the borders (dikes). The Marker Wadden project was set up to develop nature reserve areas at the east side to enhance the diversity. The basic idea is to build islands with Holocene and soft fine clay material from the lake. By using this material, the total amount of fine sediments available in the lake for resuspension will reduce, improving the light climate. The islands are designed to be an ideal habitat for birds, due to the shelter and the typical vegetation (reed).

The client defined stringent project requirements with respect to final elevations of the marsh area and strength. Those requirements are challenging due to the difficulty to predict self-weight consolidation of the soft material, characterized by large volume variations which are rather sensitive to the varying local sediment characteristics. The landscape design of the Marker Wadden was made by Vista Landscape Architects, as part of the Boskalis project consortium. This design was integrated during a iterative design process allowing for a high-quality, economical design and operational work method. One of the important design items was the consolidation  and crust formation behavior of the soft material. At a final stage, vegetation (reed) will grow on top of the crust. During the design phase of the project, lab testing, large scale pilots and numerical modelling has been carried out to understand the consolidation behavior.

In April 2016, Boskalis started the construction. The area is constructed in a number of steps and layers, as indicated in figures below. Field monitoring is carried out frequently , to monitor, amongst others, the consolidation behavior of the material in the compartments during and after construction. Because of the knowledge gained during preparation and execution, combined with the integrated adaptive management process, the work method was continuously optimized the to reduce the risk of not fulfilling the project requirements. 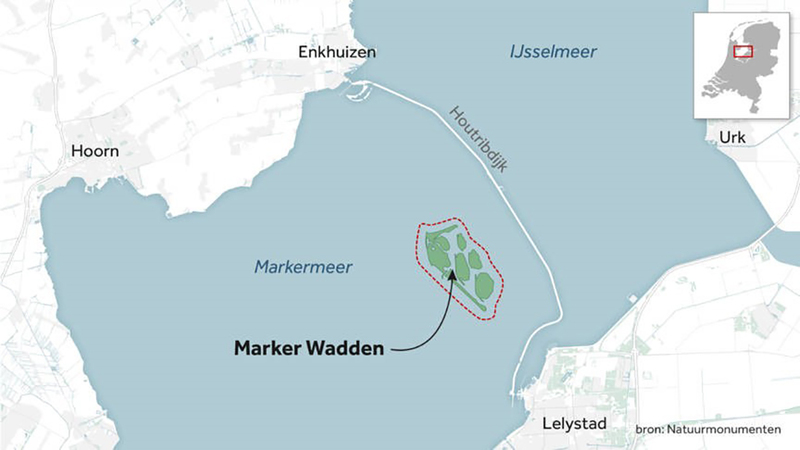