Executor
Various including Contractors Land and Water Ltd and WillowBank Services as well as Consultants ABPmer, Marine Space and Black and Veatch

Between 2012 and 2016, several beneficial use projects were carried out to protect/restore eroding marshes at the mouth of Lymington Estuary (UK).  The exposed seaward edges of these marshes have been retreating since the middle of the 20th Century and they are also deteriorationg internally due to ‘die-back’[1].  These marshes play an important role in shielding Lymington’s marinas, moorings and sea defences from wave attack.  Approximately 30,000 m3 of maintenance dredgings are taken from the harbour’s marinas and the navigation channel each winter.  In the past, all this sediment was taken out of the estuary to a disposal site.  In recent years though, a proportion has been placed on top of, or near to, the marshes to help slow their decline.  This work has been led by Lymington Harbour Commission (LHC) and Wightlink Ltd with three different projects having been undertaken:

Monitoring of these projects has provided useful lessons about the technical aspects (e.g. sediment delivery and retention) and ecological value (e.g. plant growth) of such work.  It has been valuable that different techniques were employed at one location as this allows direct comparisons to be made between approaches.  In particular, it helps to understand the comparative costs which will help inform future projects (the fee details have been kindly shared by LHC and Wightlink Ltd.).  The LHC has also, helpfully, further analysed the fees for different elements of the projects (consenting, monitoring and implementation) and compared them against the disposal at sea alternative.

[1] The exact cause of this has not been confirmed, but it is likely to be either exacerbated by, or driven by, sea level rise and increased tidal inundation as well as an insufficient sediment supply reducing the marshes’ ability to cope with these factors. 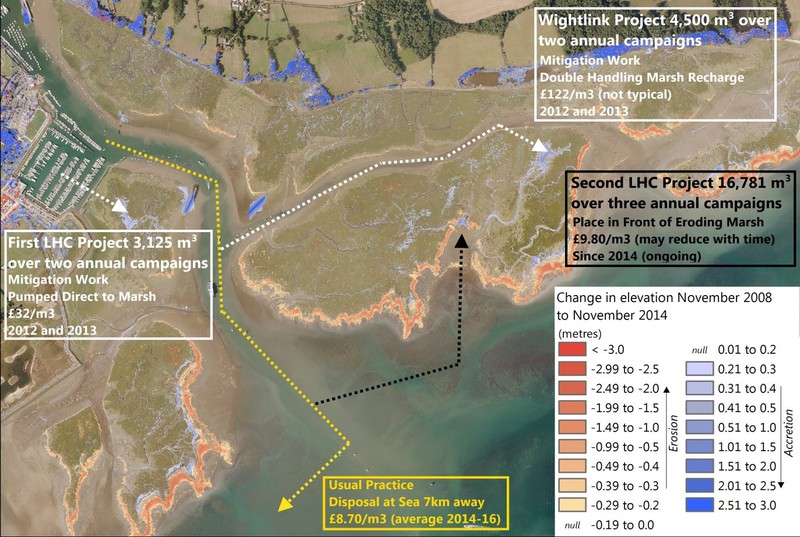