Availability of terrestrial minerals and metals supplies are under tremendous pressure. Land-based deposits are dwindling, having been exploited for decades, sometimes centuries. Humankind has consumed more aluminium, copper, iron and steel, phosphate rock, diamonds, sulphur, coal, natural gas, and even sand and gravel during the past century than all earlier centuries together. This exponential demand for minerals has led to an overall decline of the quality and accessibility of terrestrial ore that remains available. At the same time, the increasing importance of recycling and the circular economy is becoming evident. As it is impossible to achieve 100% efficiency in recycling, so new and primary sources of metal ores remain a critical factor.

Consequently, alternatives such as deep sea deposits are being commercially considered, as easily mined?ore deposits are declining. These new mining resources have been explored extensively in the last few years. Commercial interest for ocean minerals picked up after the global financial crisis when commodity prices soared as a consequence of Chinese double-digit growth. The European Union’s Raw Material Initiative was released in November 2008 and was the first policy pronouncement to indicate an interest in and support for seabed mining (EU Commission, 2008).

Furthermore, marine mining and deep-sea mining are part of the 2012 EU’s Blue Growth strategy under the thematic area of marine mineral resources. According to the Communication, up to 10% of global production of minerals such as cobalt, copper and zinc could come from the ocean floor by 2030, providing a global turnover of up to Euro 10 billion. Further, there is a global interest securing access to these mineral resources to safeguard future generations.

New resources will be found in the deep sea, or other remote locations, however mining these deposits will consume large amounts of energy. Providing these right conditions emerge, sea bed mining may soon become an operational and sustainable reality.

The seabed is divided into zones that extend from the intertidal area to the abyssal plain. Deep sea mining operations are those that typically occur below 200 metres, but can vary depending on the subsea topography. Above 200m, traditional dredging equipment can be applied (with varying degrees of success, depending on the project). The lower limit of DSM is constrained only by the depth tolerances of subsea technology. 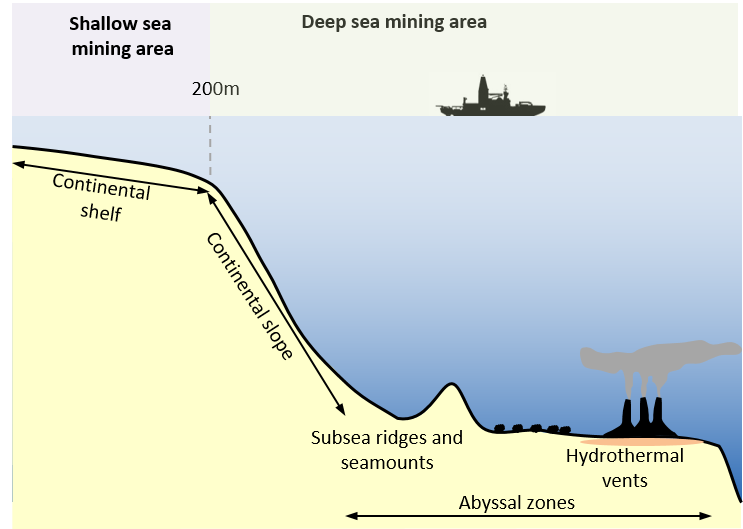 The three main types of deep seabed mineral deposits that are currently of the most interest to the deep-sea mining industry are Sulphides, Nodules and Crusts, they are found in three distinctive biogeophysical deep-sea environments and are briefly described below:

Seafloor Massive Sulphides (SMS)
SMS are associated with seismically active areas, particularly hydrothermal vents (commonly known as black smokers), and form through the interaction of seawater with magma. They contain many metals including copper, zinc, lead, gold, silver and small quantities of other metals. The areas of commercial mining interest for SMS include the Mid-Atlantic Ridge, the Indian Ocean ridges, and the South West Pacific in both national and international waters.

Polymetallic Nodules
Polymetallic nodules are found across abyssal plains in areas of soft sediment at depths between 3,500 - 5,000 m. They are formed where minerals are deposited around a solid nucleus and build up over millions of years, they generally range from 1-12 cm in length. Polymetallic nodules are comprised of manganese, nickel and copper, but they also contain cobalt, small quantities of other metals and rare earth minerals (REEs). Deep sea areas containing nodules include the Clarion-Clipperton Zone (CCZ), the Peru Basin, the Penrhyn Basin (an area in the Pacific near the Cook Islands) and the Central Indian Ocean.

Cobalt-rich Crusts
Cobalt-rich crusts are found on seamounts (underwater mountains) and other elevated submarine rock surfaces. They are formed by minerals in seawater being deposited by precipitation onto these hard sediment-free surfaces. Crusts can be up to 26 cm thick and are mostly composed of iron and manganese, but can also include cobalt, nickel, titanium, copper, tellurium and REEs. Areas containing cobalt- rich crusts include areas in the Pacific and the North East Atlantic.